Algarve and nearby sites of interest

The area of ​​land that spans the southern coast of continental Portugal is known as Algarve. It is one of the most important tourist destinations in Europe. The mild weather throughout the year, the full coast with white sand beaches and crystal clear waters of the Atlantic and diversity of accommodation and nightlife make this place a perfect destination for all kinds of people. Also, you can avoid the crowds and visit picturesque fishing villages and hills of the interior, with its rural way of life and wild vegetation.

More and more people choose  the winter season, thanks to its mild climate and cheaper accommodation in low season.

In this section, I will list some places of interest near Manta Rota. 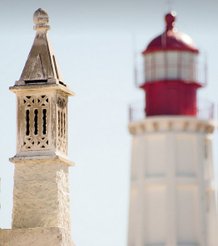 Algarve  comes from the Arabic word "al Gharb", which means "the west". The complete expression was "al-Gharb al-Andalus" (west of al-Andalus), name given to what is now Algarve and  the southern Alentejo, during Muslim dominion.

The small town of Cacela Velha is truly a vantage point towards the Ria Formosa. It has been occupied over the centuries by many peoples. Its historic core incorporates a medieval church, renovated in the sixteenth and eighteenth centuries, and a fortress of XVI century, rebuilt after the 1755 earthquake.

From Cacela Velha you can enjoy a wonderful view over the Ria Formosa. Walking through this group of typical houses is a real pleasure.

It is worth mentioning the small village of Fábrica, right on the banks of the river, just a mile west of Cacela Velha. This area is little known even to the Portuguese. It is integrated in the Natural Park of Ria Formosa and has a very low rate of construction. The values ​​of peace and harmony with nature are clearly visible. You can access the beach from the village across the river on foot when the tide is low or by small fishing boats.

There was a small town here in the sixteenth century, but it was not until 1774 when the city of Vila Real de Santo António was born. The origin of this city, which was built in just two years, was a political decision of the Marquis of Pombal, who tried to assert the power of the Portuguese crown in a territory coveted by the Spaniards. The urban project designed by the Lisbon "Casa do Risco" was characteristic of the Enlightenment urban planning organization based on values ​​such as planimetry, altimetry and volume, which explains the geometric arrangement of its streets.

The nineteenth century brought prosperity to Vila Real de Santo António, with the development of a major canning industry. Evidence of its importance  is the fact that this was  the first city in the Algarve to have gas lighting in its streets (1886).

Today, the main economic activity is the tourism. Every year many thousands of Spaniards cross the bridge connecting the two banks of the Guadiana river for sightseeing, shopping, walking the streets or enjoy the beaches.

The long beach located between the mouth of the Guadiana River and Monte Gordo Beach is the beach called "Três Pauzinhos". Like the beach of Monte Gordo, is characterized by having fine sand and warm, calm waters.

The area surrounding the beach has a Greenway, "O Caminho dos Três Pauzinhos" with reserved access to pedestrians and bicycles. The path runs between pine trees along the coast. Pine trees besides its shade, provides a pleasant smell that makes the ride a remarkable experience.

Probably, Tavira town was founded by the Phoenicians, but it was the Romans who left the most significant traces of pre-Islamic period in the city. Of all Roman legacies that still survive in Tavira, the most important is the famous Roman bridge connecting the two sides of the  Gilao river.

In the eighth century the city was occupied by the Muslims, who developed the city to become,  with Silves and Faro, in one of the most important in the Islamic Algarve. This fact is evidenced by the size of his castle. In 1242 the city was conquered by the Master of the Order of Santiago, D. Paio Peres Correia. In the following centuries, Tavira won economic importance thanks to its port. In 1520 the village was raised to status of city by King Manuel I. In the Iberian Union, Tavira lost strategic and economic importance in favor of the cities of Seville and Cadiz. In the nineteenth century, Tavira develop the tuna fishing and canning industry as new path toward economic prosperity. With the disappearance of tuna Algarve coast, the city is now turning to tourism.

The main tourist attractions are the Castle of Tavira and the Church of Mercy, with interesting tiles on the bottom of the walls.

The main Tavira beaches are Praia do Barril, Cabanas beach, Isle of Tavira beach and beach of "Terra Estreita". Barril beach is located in the center of Tavira Island, a narrow spit of white sand. Access to the beach is possible to do it on foot or aboard a sightseeing train, allowing contemplate the natural beauty of the Ria Formosa. To the east of the island of Tavira is Cabanas, a territorial area  before the last bar of the river to the east. The beach "Terra Estreita" is in front of the village of Cabanas. On the island you can enjoy a picnic surrounded by a small forest of pines. 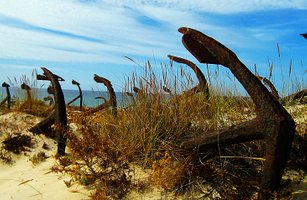